Chicken Liver Blues has a Cover 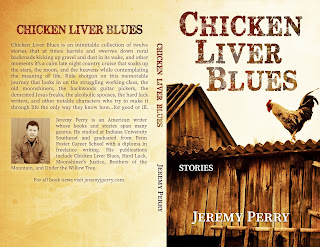 Happy to reveal my new cover for my upcoming book. Thanks to Maxcovers over at Fiverr for a job well done. Also, I hope to have a release date pinned down for this sucker very soon. Stay tuned.

Chicken Liver Blues is an inimitable collection of twelve stories that at times barrels and swerves down rural backroads kicking up gravel and dust in its wake, and other moments it’s a calm late night country cruise that soaks up the stars, the moon, and the heavens while contemplating the meaning of life.

In “Twenty Dollars” a working-class man whose marriage is on the brink of unraveling is convinced to go out for another night of drinking, but this time his night out with the guys changes his life in more ways than one.

In “Bluesman of the Woods” a young guitar rambler has the desire to make it to the big time and thinks an old family friend can help him get there, but the old friend is feeling the effects of a family tragedy and needs a jumpstart of his own.

In “The Letter” a regretful, aging writer comes down from the hills to make his yearly pilgrimage to town to hand-deliver a birthday letter to his estranged daughter.

In the country noir story “Forsaken Land” Sheriff Randall King is feeling the repercussions of losing his younger sister and of a deadly shootout, both of which happened one year before.

In “One Step Closer to Heaven” a young couple is convinced that eliminating all the free-roaming sexual predators of the world will give them full access through the Pearly Gates.

In the horror-flavored “The Man in the Meadow” a young boy seeks an inhumane course in order to deal with a school bully, but finds out his chosen tactic is a messy one for all involved.

Ride shotgun on this memorable journey that looks in on the struggling working-class, the old moonshiners, the backwoods guitar pickers, the demented Jesus freaks, the alcoholic spouses, the hard luck writers, and other notable characters who try to make it through life the only way they know how…for good or ill.

Featured Stories:
Twenty Dollars
Money
Chicken Liver Blues
The Natural Order of Things
Bluesman of the Woods
The Letter
Jubal Grimes
King of the County
Forsaken Land
The Monsters
One Step Closer to Heaven
The Man in the Meadow